As ever with our wonderful media there has not been anywhere near enough about the New Horizons probe which reached Pluto recently, so here are a few key facts for you engineers to get your heads around… and get you ‘Googling’ !  Remember it was ‘engineers’ who made a massive contribution to this project… 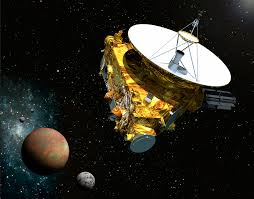 New Horizons is an interplanetary space probe and was launched on January 19th 2006 with its main mission being to reach Pluto.

Pluto was discovered in 1930 by Clyde Tombaugh, and was originally considered the ninth planet from the Sun. After 1992, its status as a planet fell into question following the discovery of several objects of similar size in the Kuiper belt. In 2005, Eris, which is 27% more massive than Pluto, was discovered, which led the International Astronomical Union to define the term “planet” formally for the first time the following year. This definition excluded Pluto and reclassified it as a member of the new “dwarf planet” category (and specifically as a plutoid).  Some astronomers think that Pluto and the other dwarf planets should be considered planets.

Starting on  Saturday 5th September 2015, the spacecraft will begin an “intensive” downlink session that will last for a year or more, sending back the tens of gigabits of data the spacecraft collected and stored on its digital recorders during the flyby. What will come first are “selected high priority” data-sets that the science team has been anxiously waiting for.

One issue is the time it takes to get data from New Horizons as it speeds even farther away from Earth, past the Pluto system. Even moving at light speed, the radio signals from New Horizons containing data need more than 4 ½ hours to cover the 4 billion km (3 billion miles) to reach Earth.  But the biggest issue is the relatively low “downlink” rate at which data can be transmitted to Earth, especially when you compare it to rates now common for high-speed Internet surfers.

Here are a few last facts for you to contemplate…. It took the probe 9.5 years to reach Pluto at speeds approaching 36,000 miles per hour. By 2026, as power runs down on the probe’s plutonium supply, the mission is expected to end…. However, if the probe is still functioning by 2038 it will be entering the outer heliosphere. Hypothetically, if it had unlimited fuel and power, at the same speed of 36,000 miles per hour it would take over 20,000 years to reach the next nearest star, Proxima Centauri, 4.243 light years away from Earth.

Have a look at the NASA website showing further images:- NASA New Horizons

This short video on YouTube is one of my favourites to get your grey matter tingling even further:-  Planets and Stars Size Comparison  (once you have skipped any adverts !)