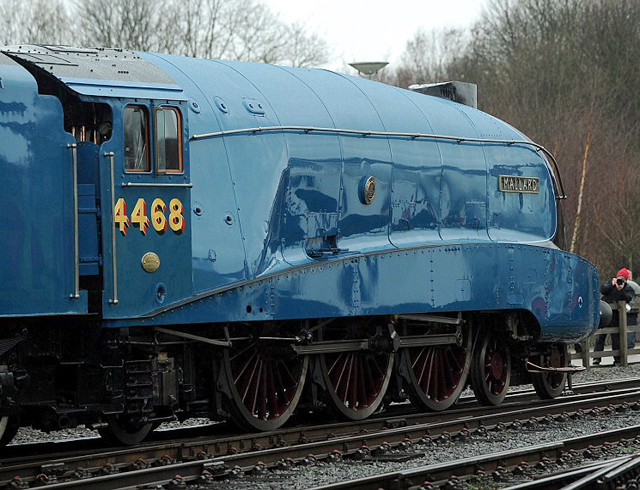 In July 2013 there was a great reunion of A4-class Pacific Locomotives at the National Railway Museum.  ‘The Great Gathering‘ was to celebrate the 75th anniversary of ‘Mallard‘ becoming the fastest steam locomotive in the world.  On 3rd July 1938 the world steam locomotive speed record was set at 125.88 miles per hour by Mallard hauling a train of six coaches and a dynamometer car.

Mallard was one of 35 near-identical A4-class locomotives designed by renowned engineer Sir Nigel Gresley – the man also behind the Flying Scotsman.

(See further down the page for photographs of the event…)

Joseph Duddington was the driver on that momentous day…

In the words of Rob Gwynne, Assistant Curator of Rail Vehicles at the National Railway Museum:-

“Duddington, then aged 61, climbed into the cab, turned his cap around (as had George Formby in the contemporary film No Limit), and drove Mallard into the history books. He had 27 years on the footplate, and had once driven the Scarborough Flyer for 144 miles at over 74mph (average speed), considered at the time to be the highest speed ever maintained by steam in the UK.”

You can see what the footplate looks like and read how Joseph Duddington broke that record using this link to another article:-   Driving the A4 ‘Mallard’

These are the six locomotives that were gathered together:-

Here are photographs of the celebrations.  Click on any one for a slide show….