I was born in Bradford and served my apprenticeship at International Harvesters at the former site in Idle of Jowett cars. My father had served his time at Jowett as a apprentice before Harvesters took over. Later he was a toolroom turner before he became an industrial engineer specialising in tooling.

I came out of my time as a machine tool setter just before Harvesters closed in 1982. From there I worked at Carr Lane Engineering, suppliers of engineering equipment, until I finished my HNC at Bradford College. I then moved to Wetherby Engineering (Bradford) as a CNC turner and then went on to be a production engineer and supervisor. After nineteen years I left to seek my fortune at BPE, the manufacturing side of Boxford Lathes. I stuck at that for a year but did not get on with a couple of disreputable types and so left.

I then moved to Economos in Leeds as a CNC turner, turning plastics and rubber to make seals. It was a very good place to work and I am going to ask if we can visit them, as what they do is a quite interesting contrast if you are used to metal cutting. I was then contacted by Wetherby Engineering to go back as the Works Manager and the offer was too good to miss. The MD at Economos (Based in Slough) was a bit upset but thanked me for all my work and presented me with a cheque for a very nice sum as a parting gift. He also framed my resignation letter and nailed it to the wall (I can be a bit of a comedian given the chance, but that’s a story for another time.)

Wetherby Engineering closed down after seven years and a good friend, Pammy Bussan, who owns Stratton Services, aka Horton & Armitage, set me on, doing some CNC milling, working with his son Anton for a year and a half, before coal fired power station operations reduced and so the work declined.

I left that company and ended up at Deighton Manufacturing, again at Bradford, operating and programming a CNC milling machine. In all this time I have been very lucky to meet some top class people and a few characters and I have many a tale to tell. I am sure that some of you will have had a similar path in your careers and I would love to hear about your working life, interests, hobbies and experiences. So please get typing and let us know all about you.

When not working I have been getting seven bells kicked out of me whilst doing karate for the past forty-three years. I have enjoyed motorcycling, having spent a good few years kicking about with a friend who was like me a  ‘President’ but his post was with an outlaw motorcycle club !

So, to summarise I am just a grease monkey again and dropped down the ladder to be back on the shop floor just like I was in 1978, but I love it, working with some top notch engineers and to top it all the roof doesn’t leak and it’s warm in winter !

I am looking forward to the challenge of being President of the association for the next couple of years and encourage members to come along to as many events as they can. The prosperity of the association depends on your support. If you know of anyone who might be interested in joining then please do your best to encourage them as we need new members to ensure our prosperity. I was not the only one to be presented with a ‘gong’ recently and at the 2017 AGM Ross Town volunteered to take on the role of Vice-President and he was warmly welcomed by the council and membership.

On behalf of the council and me we look forward to your company at the forthcoming events and send you all our best regards.

President of the Leeds Association of Engineers 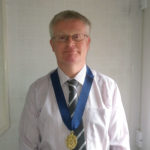