The ‘Taj Mahal of Ipoh’

For the last twenty-odd years I have travelled around South East Asia and to the dismay of my travelling companions have never missed the opportunity to investigate and inspect a local railway or any associated buildings. I have to admit that I am not an expert on railways as are some of my friends but I have more than a passing interest and I love to travel by rail. The modern country of Malaysia was the former British colony of Malaya until it gained independence in 1957. The country has many remnants of British influence and it is only in recent years that the authorities have realised the historic value of some of the colonial buildings, many of which were left to decay and are only now being restored.

The city of Ipoh lies 120km south east of Penang and 180km north of the capital of Malaysia, Kuala Lumpur. It is the fourth largest city in the country and was once a centre of tin mining. As the tin deposits depleted the city looked towards tourism and the British colonial-era architecture was destined to be one of the city’s main attractions. 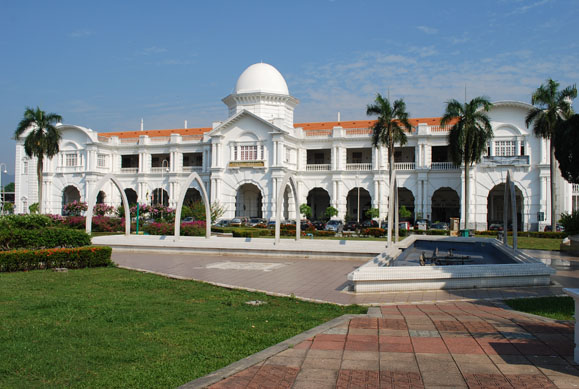 Right smack in the heart of Ipoh city lies the majestic Ipoh Railway Station with its blend of neo-Moorish and British influenced architecture. Locals fondly call the station ‘The Taj Mahal of Ipoh’ because of similarities to the iconic structure in Agra in India. It’s a bit of a tenuous comparison ! It was designed by Arthur Bennison Hubback (1871-1948), a British architectural assistant to the director of public works in Malaya. The railway station was built in 1914 by the East India Company at a cost of RM335,000, the equivalent of around £60,000 back then. It was opened in 1917. The first railway track in Malaya had been built from Taiping to the port of Kuala Sepetang, north west of Ipoh. It was used to transport tin ore from the mines and rubber from the plantations to the port. The railway network expanded and soon a rail link was built from Kuala Lumpur to Butterworth, a town on the mainland adjacent to Penang island. Ipoh became an important transportation hub between the two larger cities. The railway was known as the ‘Malayan Railway’s West Coast Line’. 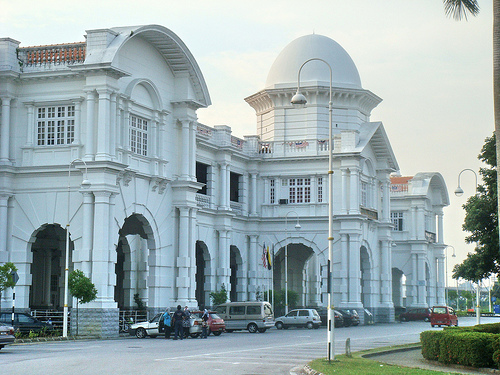 The station building originally housed the Majestic Hotel on the top floor and there were splendid views of the old city. There are plans for restoration of the hotel but most work on the building has been done to restore the railway station. Recent years have seen the introduction of the ‘ETS’, electric train service. All new twin tracks were laid between Gemas in the south, at the junction with the East Coast Line, and Padang Besar in the north at the border with Thailand. The system meets up with the ‘Southern State Railway of Thailand’, which so far is not electrified.

The ETS trains use Class 93 electric multiple units built by CSR Zhuzhou of China and run on 1m gauge track at a maximum speed of 140km/h. The trip from Penang to Kuala Lumpur which used to take five to six hours on the old track can be covered in as little as three hours with a short stop in Ipoh. There are nine tracks at Ipoh station, with four of them electrified, three of which are used for the ETS service.

There are plans to link Singapore, south of the Malay peninsula, with Bangkok in Thailand, with a fully electrified service, covering a distance of over 1,800km (1,140 miles).