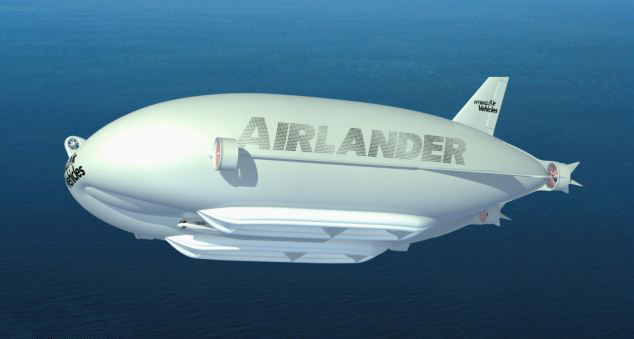 The world’s longest aircraft (as opposed to a lighter than air ‘airship’) has just been unveiled at an airfield in Cardington, England, from where the great airships of the 1920’s flew.

At first, you might mistake it for a giant airship – gas-filled balloon on top, pod slung underneath.  But the unique, aerodynamic shape of the balloon – it looks as if a series of cigars have been sewn together – means it can also generate lift just like an aeroplane wing.

That is key, because it enables the designers to make the machine heavier than air, which cuts the need to have dozens of crew hanging on to ropes holding it down every time you land.

In fact, you can land it via remote control with no-one on board at all if you like. And on water if needs be. This craft is two-and-a-half times longer than the distance covered by the Wright brothers’ first powered flight. The world’s largest aircraft which can stay airborne for up to three weeks and will be vital in delivering several tonnes of humanitarian aid.

With a length of 302ft (92m) the new airship is about 60ft longer than the biggest airliners, the Airbus A380 and Boeing 747-8. It is also almost 30ft longer than the massive cargo-carrying Antonov An-225 (click the link to learn more…), which until now was the longest aircraft ever built. The current aircraft can carry a load of 1225 kg for up to 21 days, but on shorter flights could take up to 5 tonnes.

It costs about £60 million and the designers are planning an even bigger version that will eventually be able to carry 50 tonnes at a time. The company developing it has now received £2.5 million of government funding to develop the technology and engineering for the project. The giant aircraft is being brought back to life by a British company which plans to build hundreds of the environmentally friendly craft for passengers and cargo.

“We are jointly funding £2 billion of research and development into the next generation of quieter, more energy efficient and environmentally friendly planes,” says Business Secretary Vince Cable. “That includes backing projects like Hybrid Air Vehicles’ innovative low carbon aircraft which can keep us at the cutting edge of new technology. “Here is a British SME that has the potential to lead the world in its field.”

Click on any of the pictures below for a slideshow…

Open Maps Widget for Google Maps settings to configure the Google Maps API key. The map can't work without it. This is a Google's rule that all sites must follow.