It has come to the notice of the association today of the passing of Wing Commander Ken Wallis.  He came to Leeds many years ago to talk to us about his life and exploits, particularly in relation to autogyros.  I well remember a packed lecture theatre at the University of Leeds being enthralled by his illustrated stories and anecdotes. He was by then in his eighties and had driven up that afternoon from his home in Norfolk to give his talk to the association. We had naturally offered overnight accommodation but he insisted that he would be driving all the way home after the evening lecture. There are numerous obituaries now in the press but members might be interested to read this one below, by an anonymous author, reprinted from the journal ‘The Engineer’. 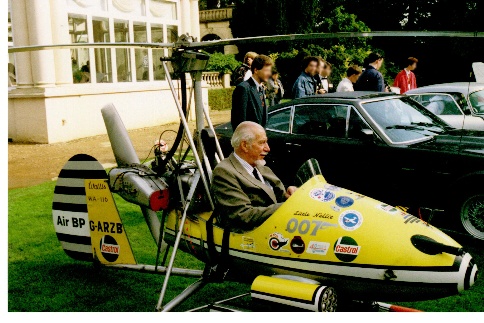 The passing of an engineering icon…

He was born in 1916, joining a family already successfully experimenting in powered flight and it wasn’t long before such genetic predispositions showed themselves in the young Ken. Before the age of twenty he had designed and built various motorbikes, cars and speedboats but the war prematurely blocked this path; taking him away to become a bomber pilot flying Lysanders and Wellingtons.

After the ceasing of hostilities he continued in the RAF, being involved with weapons development and gaining a number of patents before retiring in 1964. During the 1950’s he continued his previous engineering hobbies, amongst other things developing and building his own super small slot cars and cameras (both with remarkable results). Perhaps most significantly he also started his life with autogyros, probably the device that he will forever be most closely linked with.

With such a modus operandi he, of course, started to modify and improve the breed. His aircraft were safer than those which had gone before and he became something of an autogyro evangelist. Their robustness and low cost made them viable for many applications and yet I suspect we have still to see the widespread use that he envisaged.

His highlights with this type of aircraft include setting many records as well as building and flying the immortal “Little Nellie” in the James Bond film “You Only Live Twice.” This latter point was I suspect something of a double edged sword which shows up most keenly in the obituaries to be found online. All seem to focus on him as Connery’s stunt double in the flying sequences and many mention his autogyro world records but none his steady development and general championing of them.

Perhaps marking his passing is an opportunity for us though? Against the backdrop of continued discussion about increasing the awareness and status of our profession there has been a continuous dialogue regarding how to engage a wider audience. If ever there was a perfect “hook” into the general public conscience it is the remarkable life of Wing Commander Wallis.

War hero, pilot, the Bond movies, world records and a thoroughly decent gentleman. A while back I suggested the Institutes fund colour cutaways a lá Ashwell Wood to be given away in newspapers. What value to us I wonder in them producing a biographical film? After all The Fastest Indian, The Dam Busters and The First of the Few are all well regarded and all have engineers at their core. For now though we should just raise a glass and mark the passing of a true engineering icon.    Ken Wallis – RIP.