When we think of Bugatti, we generally think of classic sportscars like the T13 and modern day supercars such as the all-conquering Veyron. However, back in the late 1930s, Ettore Bugatti also set out to build racing aircraft. In 1937 he began construction on a radical machine that had a swept-forward wing design, a twin-V tailplane, and twin contra-rotating propellers powered by two Bugatti straight-eight engines. Unfortunately, the Second World War broke out just before the aircraft was completed and Bugatti had to flee Paris, taking his creation with him. 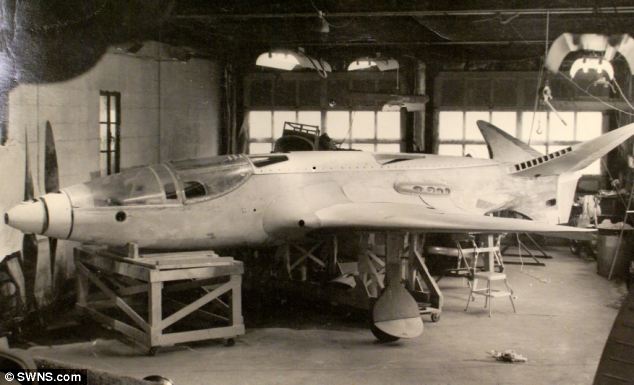 Today a group of dedicated enthusiasts are recreating Bugatti’s dream and building a replica that, unlike the original, will soon take to the skies. Dubbed the 100P, Bugatti had intended to build and fly it against the best aircraft of the time, such as the 469 mph (755 km/h) Messerschmitt Me 209, to win at the Deutsche de La Muerthe Cup. Bringing in famed aeronautical engineer, Louis D. de Monge to assist in the design, the original aircraft used just one straight-eight, 450 hp (335 Kw) Bugatti Type 50 engine. However, the pair soon abandoned this design for a tilt at an even greater prize; the world air speed record.

As such, the 100P was then fitted with two Type 50 engines behind the cockpit driving a propeller each in a complex arrangement where the front engine was slanted to the right and joined to a drive shaft at the firewall behind the pilot, which then passed by the pilot’s right elbow. The second engine was slanted to the left, in a similar arrangement to the first. Just past the pilot’s feet, the two drive shafts merged at a gearbox and then connected to the two contra-rotating propellers.

The technologically-advanced Bugatti 100P was built – of all places – on the second floor of a furniture factory in Paris. Despite its humble surroundings, the 100P was constructed like any other finely-tuned Bugatti creation and possessed elements that predated many innovations not to be seen in allied fighter planes until the 1940s. Had the development been allowed to continue, and the craft built as a military machine as the French government of the time had mooted, the 100P may well have also made a supremely fast, highly maneuverable fighter easily capable of overcoming even the fastest German aircraft of the time.

The original 100P, after its hasty removal from Paris as German troops approached, was stored in a barn for more than 30 years. With Bugatti dying in 1946, just one year after World War Two ended, the 100P remained untouched until the 1960s, when it was sold – and resold – to various American collectors and shifted to the United States, where its engines were removed and fitted to Bugatti automobiles. Later restored, without engines, the airframe now sits in an aircraft museum in Oshkosh, Wisconsin.

As the restored shell of the 100P is too fragile and rare to even contemplate being flown, a group of enthusiasts have decided to recreate this amazing aircraft from scratch. With few plans and working largely from donations, the international team at the Bugatti 100P Project has had to create almost every single part on the machine, spending many thousands of hours putting it all together.

Utilizing modern fiberglass techniques, machined alloy fittings, and other materials not available to Bugatti in the 1930s, the 100P project aircraft is, however, true to the size, power, and shape of the original. As such, the flying dynamics and handling characteristics should also be accurate. Though what they are is largely unknown with the original never actually having made it into the skies, let alone off the factory floor.

On August 19th, 2015 the team announced that they had completed their first successful test flight of the replica aircraft. Its handling characteristics were “as expected” by the team, and it achieved a maximum altitude of 100 feet (30 meters) AGL at a maximum speed of 110 knots (200 km/h). On landing though the plane “floated much more than anticipated” and landed significantly farther down the runway than intended. Because of this the wheel brakes needed to be applied to keep from overrunning the end of the runway. Subsequently the right brake failed, sending the aircraft into the muddy soil adjacent to the runway, tipping it up in its nose and generating a prop and spinner strike….

For you Facebook users here is a link to the photo stream page of the project:- Bugatti 100p Project   (You will need to log in to your Facebook page to use the link).

Keep an eye out for further news of this interesting project………..